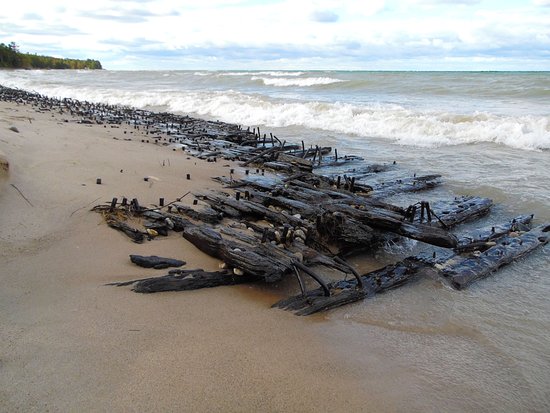 The wooden steamer Joseph S. Fay was built in 1871, at the Quayle & Martin shipyard, Cleveland, Ohio. The Fay was among the first of the Great Lakes freighters built for the iron ore trade. The schooner, D. P. Rhodes was built to be the Fay's consort and they were paired for over thirty years. They were one-owner boats operating for the Bradley interest, and were painted with bright green hulls, broad white rails and red stacks characteristic of the Bradley fleet. (Nothing to do with Bradley Transportation of later years)

On October 19, 1905 in heavy seas, the Fay with the Rhodes in tow, departed from Escanaba, Michigan and was downbound on Lake Huron. Destination -- Ashtabula, Ohio. Both boats were fully loaded with iron ore. The captain hugged the coast seeking some protection from the violent wind and savage waves. The wind shifted violently, whipping inland. The Fay was being swept to shore! The seasoned captain turned toward open water desperately trying to gain control of his ship. The straining towline tightened, pulling taut. The ships rolled in opposite directions and the Rhodes broke free taking a portion of the Fay's stern with her.

Suddenly free, the Fay gained some forward movement, but she was now sinking. Water rushed into the hull. The fires in the boilers would be extinguished leaving the boat powerless and adrift. Cold, wet and nearly frozen, the crew crowded into the forward cabin. The captain struggled to bring the Fay around and head to shore toward 40 Mile Point Light Station.

It was a close race, but the Fay made it. Her bow struck a sandbar and the entire forward cabin was torn off. The wheelhouse, deck, mate's and captain's rooms were ripped from the deck. Incredibly, huge waves lifted the structure and carried it to shore where it washed up on the sandy beach near the light station. The captain and 10 crewmen were safe inside. In fact, one of the crewmen was reported to be asleep and didn't even wake up!

First Mate David Syze of Port Huron and two other crewmen weren't so fortunate. Clinging to the beached hull, the struggling men ripped off a spar and used it to paddle to shore. The first mate attempted to swim, but was overcome by the cold and was lost.

The lighthouse keeper's log for October 20, 1905 simply reads: “At 8:30 p.m. last night the steamer, J. S. Fay, came ashore here in a sinking condition. She soon broke up. Most of the crew came ashore on the Pilot House. Three men swam ashore, the mate was drowned.” The entry for December 4, 1905 reads: “The assistant found a dead man on the beach about 1 mile up. We think it is the mate of the Fay.”

The Rhodes and her entire crew survived, but it was the end for the Fay. She eventually broke up on the sand bar and sank in about 12 feet of water. But, if you visit 40 Mile Point Light Station and stroll up the beach about 200 yards, you can see some 150 feet of her huge wooden side, metal rods and spikes holding her steady, resting in the sand.

Bulwarks were cut down in the 1880's, top hamper reduced in later years. There were never any significant structural changes. 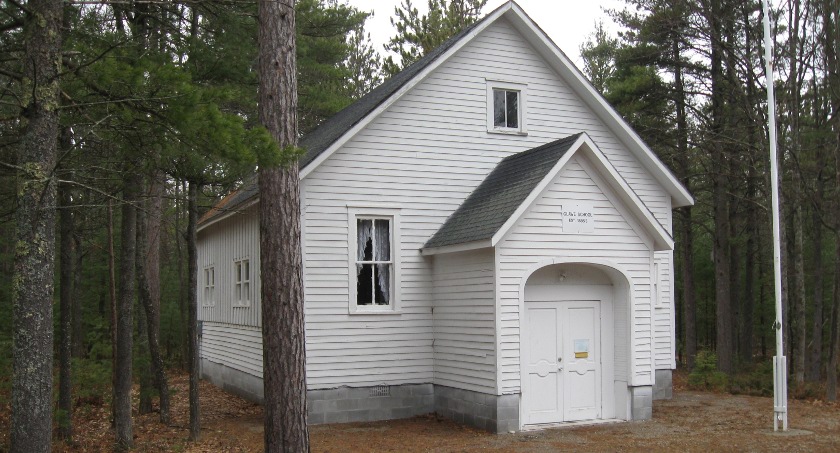 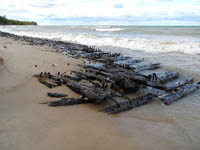 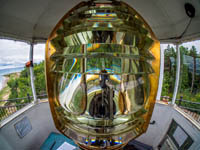